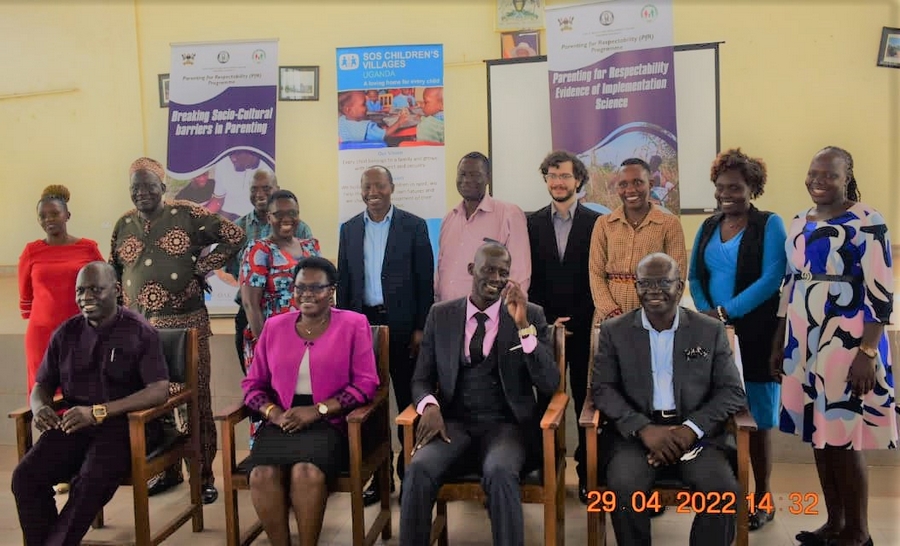 Hon. Grace Freedom Kwiyucwiny, the State Minister for Northern Uganda, has entreated Child Health and Development Centre-Makerere University (MakCHDC), to present their findings from its Parenting Project to the Parliamentary Children’s Committee and the Gender Committee. She explained that these two committees will make certain that this research outcome finds its way into policy and the budget.

Hon. Kwiyucwiny was speaking at a dissemination workshop held in Amuru district where the Parenting Project called Parenting for Respectability (PfR) was presenting preliminary findings from research done in the district.

The Minister who said she is looking forward to receiving a copy of the report, noted that PfR was a good programme which should be scaled up. She reported that the people of Amuru and Wakiso districts were very lucky. This is because all the 500 persons who were trained in positive parenting practices during the research are a good resource for Amuru to start improving in this area. “These should be role models within the community and should be utilized by the community development office to solve a lot of problems,” she explained.

This purpose of this study (cluster Randomized Control Trial-cRCT) was to evaluate whether the programme was effective at improving parenting skills while reducing violence in the home, at the same time.

Mr. Paul Bwamiki, the Programme Director of SOS Children’s Village (SOS) in Kakiri, who made opening remarks informed participants that SOS was increasingly focusing on the family strengthening component to reduce on the number of children being abandoned on the streets.

He also expressed his dismay at seeing very many good houses in the country that on the contrary, lack the parenting component. SOS Children’s Village is a collaborating partner with MakCHDC on this study. Other partners/funders are Glasgow and Oxford Universities, from the United Kingdom (UK). The Ministry of Gender, Labour and Social Development (MGLSD) supports the project with oversight and with monitoring the implementation process.

Dr Herbert Muyinda, the Director of MakCHDC, revealed that the Centre was prioritizing the role of parenting because the health of the child was beyond biomedicine. The Director informed participants that GBV was a multi-sectoral problem which needed people coming together to solve it. And as a research institution, CHDC’s role is to ensure the availability of evidence for policy and other stakeholders to tackle this problem, he added. Dr Muyinda called for ‘participatory parenting’ where everybody is involved including religious leaders, district leaders and the community; instead of leaving childcare to women alone.

Dr. Godfrey Siu, the Principal Investigator of the PfR programme informed participants that the study was implemented by a number of partners including SOS CV which coordinated the recruitment of parents, district entry, and the organizing of community members. The study was done from October, 2021 to February, 2022.

“We also collaborated with Lamogi Sub-County leadership, and the Community Development Office has been at the forefront of implementing this programme in the sub county from identification of study sites, mobilization, recruitment of parental groups, training facilitators to monitoring implementation and giving culturally sensitive advice,” Dr Siu further revealed.

Presenting the findings, Dr. Siu said the demographic characteristics indicated that there were 2,328 caregivers with a mean age of 38.1 years. The mean age for the females was lower than that of the men at 37 years, while for the men, it was 40 years. Fifty-three percent (53%) of the caregivers were women and 47% were men. This showed that there was a very good involvement of the men in the programme.

The programme recruited 886 children with 54% recruited in Amuru and 46% recruited in Wakiso, with a mean age of 12 years in both locations. The family size was 4 children per family, with 10% of these children having at least one form of disability. 9% of the children mentioned to have gone to bed hungry.

District leaders impressed by the programme

Speaking at the function, Lt. Col. Pius Alitema, RDC of Amuru district, reported that as a parent, he did some soul searching during the presentation. Reflecting on his home district Maracha, he pointed out that children’s names are given to reflect the levels of violence in the family. And this has been a norm. “Some of the names describes the behaviour of the fathers and gives you a rough idea of what happens in those homes,” he revealed.

The RDC commended the people of Amuru for actively participating in the study. He also recommended the suitability of the PfR programme for all district leaders adding that it should be rolled out throughout the country so that parents can acquire respectable parenting skills.

Hon. Simon Wokorach, the Member of Parliament for Aswa, who was also present said he was touched by the fact that the participation of men in parenting was still a big question in the country. He emphasized the importance of the involvement of both parents in parenting and was disheartened that there were many child-headed families in the area because of the past civil wars in the area.

Hon. Wokorach pointed out that most parents leave their home to go to work, leaving their families under the care of children, and only return very late to eat super and sleep. The MP called on the Ministry of Gender to adopt the PfR programme. He explained that this will improve the wellbeing of families. Wokorach also encouraged leaders - in religion, politicians and policy makers – to spread messages about parenting in their respective areas.

Hon. Gilbert Olanya, the Kilak South County MP said he had noted the parenting gap as indicated in the findings. He observed that many Ugandans do not take parenting seriously. After giving birth, they take the children to school and that is the end. The presentations however opened his eyes and he promised to be the best advocate of parenting in Uganda.

The legislator promised to become an advocate for the project by taking copies of the presentations to the Committee on Gender and Children affairs. He encouraged the CHDC study team to make these presentations to Members of Parliament on top of having the programme rolled out throughout all the districts in the country.

The Rwot of Lamogi Sub County who gave the closing remarks emphasised the striking of a balance between parenting and child rights. He noted that there was a lot of substance abuse, a figure that was captured in the report indicating that it was at 40%.

He was concerned that the tradition where a wango (fire place) was lit so that parents could talk to their children about issues of life is no longer there.

The Rwot appealed to organizations to always go through traditional leaders when bringing such projects to the area since they know how best to deal with the local people.  He further appreciated the good work that had been done by the study and called on the MPs present to forward this work to Parliament so that if forms part of parenting policy.

The leader of Lamogi further promised to support the project activities in the area and assured the team of security when working in the sub county.

About the PfR Programme