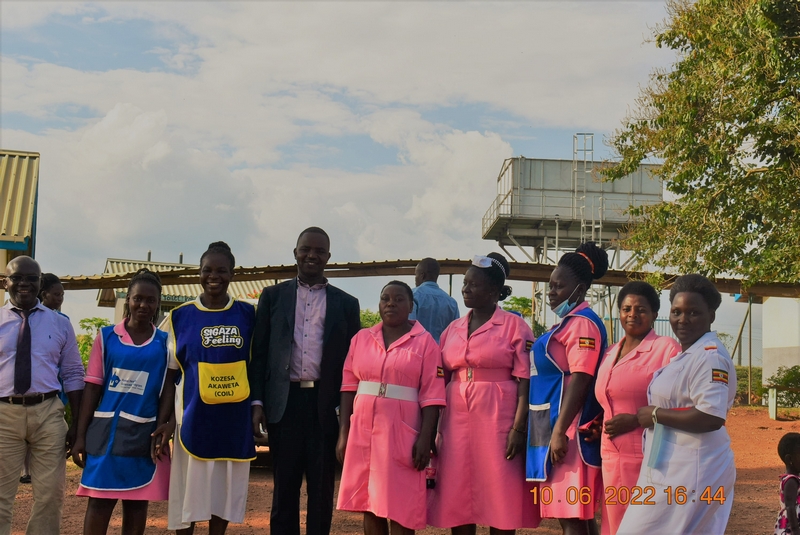 On 10th June 2022, a team from the Ministry of Health, and Makerere University, visited Ntuusi Health Centre IV in Sembabule district. This visit was a follow-up on a mentorship training that was done at the health centre a month earlier by Makerere University under the RMNCAH (Reproductive, Maternal, Neonatal, Child and Adolescent Health) Project.

The RMNCAH project is housed under the Child Health and Development Centre (Mak-CHDC) which is in the College of Health Sciences at Makerere University. It is a collaboration between Mak-CHDC and several health professional associations like UNMU (Uganda Nurses and Midwives Union), (UPA) Uganda Paediatric Association, (AAU) Association of Anesthesiologists of Uganda and (AOGU) Association of Obstetricians and Gynaecologists of Uganda.

The main objective of the project is to coordinate these Health Professional Associations and Regional Referral Hospitals (RRHs) in implementation and provision of mentorship for RMNCAH at general hospitals, Health Centre IVs, and Health Centre IIIs in the Central South Region of Uganda.

The visiting team was led by the Director of Mak-CHDC, Dr. Herbert Muyinda. Dr. Eleanor Nakintu and her team from BAMA (Babies and Mothers Alive) was part of the team doing the monitoring and training. Dr. Gonzaga Ssenyondo, a Senior Obstetrics/ Gynaecologist Consultant at Masaka Regional Referral Hospital was also part of the team that was following to check if RMNCAH’s recommendations to the health facility during their previous visit had been implemented.

This team was later joined by the Commissioner in charge of Reproductive Health at the Ministry of Health, Dr. Richard Mugahi, the Chief Administrative Officer of Sembabule, the Town Clerk, the District Health Officer, and his Assistant.

According to the staff of Ntuusi Health Centre, challenges they face include shortage of medicines, limited human resource, no promotion at the workplace even after further studies, no accommodation at the workplace and uncoordinated transfers. These were all communicated to Dr. Mugahi.

On the other hand, the Chief Administrative Officer promised to give the Centre an ambulance so that complicated cases are quickly referred to Masaka Regional Referral Hospital.

With each piece of good news, the staff who were in high spirits, gave a thunderous clap. The Commissioner informed the staff that he had worked in several health facilities all over the country. Having began his health services career as a VHT, he said he could perfectly identify with the challenges that the staff were facing like the lack of accommodation.

The Commissioner also affirmed that the staff would be getting a salary increase which government had promised in the next financial year that is starting in July, 2022. However, government was going to keep a close eye on them to make sure they perform accordingly.